I’m nearly 33 weeks pregnant, which is starting to sound like for real, legit pregnancy.  So I thought I’d write a quick thing and post some pictures of me making awkward faces at my cell phone.  I just learned about the existence of selfie sticks last week and was horrified and appalled, and today when trying to take a picture I actually thought, Wow, a selfie stick would be really useful right about now.  Heaven help me.

Anyway, when I got pregnant this time around I originally had planned to do in-depth weekly updates here with all the nitty gritty details about weight gain, cravings, weird symptoms and issues, etc., and the craziness of life has just gotten in the way.  But here’s the update for 32 weeks.

The Baby: Weighs about 3.75 pounds, is about 16.7 inches long, head down (at this point), wiggles around fiercely, sometimes for hours, every night as I lie down to go to sleep. We don’t know the gender and are pretty much completely up in the air about baby names at this point. Yikes!

Weight gain: 20 pounds. Feeling pretty much enormous but trying to remember that my body knows what it’s doing.  And that there have been months where I have been SUPER careful about what I eat and I’ve gained 6 pounds, and then other months where I’ve eaten relatively quite a lot of ice cream, chocolate, etc, and gained less.  My sweet sister in law wrote a beautiful blog post about pregnancy and body image when she was pregnant with my niece, if anyone is going through this whole crazy thing and needs some encouragement.

Cravings/Food: Not craving too much these days, which is great.  Except hamburgers. And anything chocolatey/sugary. And the ice from Ithaca Bakery now that it’s warm. Just the ice in a nice, big cup. Trying to eat lots of fish– mostly sardines and canned anchovies (not the super salted ones, just little anchovies in a tin like sardines) and tuna and salmon.  I try to buy the sardines/anchovies/salmon with the skin and bones included, because you actually get a pretty huge amount of calcium from the little bones (which you can just crunch up and eat). Mostly sticking with the little fish (less mercury) but tuna is a lot cheaper.  Also eating either lentils or mung beans a few days a week for lunch, and as many vegetables as I can manage. And eggs every morning for breakfast.

Herbs/Supplements: I take a gummy prenatal (because for a long time I couldn’t stomach the thought of swallowing anything), plus cod liver oil a few times a week and fish oil. Drinking lots of herbal tea.  Nettle and raspberry leaf and things like that. I’m hoping to write more about that soon. I read in one of the pregnancy magazines at the doctor’s office this week that healthy amounts of Vitamin D may decrease pain during labor, so i’m planning to spend the next 8 weeks in the sun as much as possible.  Which I would be doing anyway, but this will just be extra motivation. 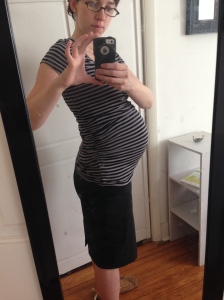 Clothes: I’m pretty much down to about a skirt or two and a couple of t-shirts now that it’s warm.  My entire first pregnancy was during the winter– Will was born on May 6th, and I bought maybe a couple of t-shirts during the last week or two, but it was chilly enough through late April that I was wearing jeans and long sleeves the whole time.  Sooooo this time around I’m going to have 8 weeks or so of warm weather to dress for.  A lady at church asked me just last week if I had any summer maternity clothes, and I told her not really, and she said she had a ton that she would bring! So hopefully tomorrow!

I do have this black dress (below) that I found on sale at Target for $9 (and wore it to a wedding in March), a couple of t-shirts and a skirt or two.  I’m hoping some of my friend’s clothes will work out, because I don’t want to have to buy a whole new wardrobe (even a very small one) for just a few weeks of pregnancy.

How I’m Preparing for Birth: By not doing anything except running around after a toddler.  Last time around I took prenatal yoga classes, listened to hypnobirthing tapes, did visualizations and deep breathing exercises, read about a hundred books about natural birth, and thought about it obsessively.  I did open one of Ina May Gaskin’s books to read some birth stories last week, for inspiration or something, and the pictures of babies emerging from vaginas filled me with a deep horror and dread and caused me to remember the unspeakable pain of last time, so I stopped reading and I’m just going to really try not to think about it and hope for the best. Once every 2 or 3 days I tell Will we’re going to do some yoga, and I’ll do cat/cow for about a minute and a half before he starts crawling on me, and that’s that. (Actually, I’m sort of kidding– Will will do baby yoga with me for quite a while before he starts climbing on me, and seeing him imitate the poses is adorable.  But still, overall yoga time is negligible).

Speaking of Will, he is about to turn two, and as I write he is in his crib, having just woken up from a nap, singing a little song to himself.  His little singing just kills me.  He also found a purple bead in the yard the other day and carries it around like his most prized possession.  He takes it outside when he and John play in the yard and he drops it every few minutes and then in a very concerned voice says, “Bead! Bead! Bead” over and over until John searches through the long grass and finds it. Now his song has developed lyrics, and the lyrics are, “Mommy, mommy, mommy,” in the softest, most plaintive voice you can imagine, so I’m off to get him up.

View all posts by Laurie